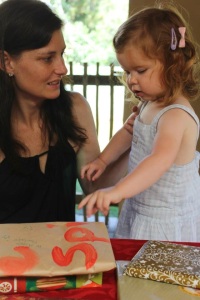 We all know how it starts: “‘Christmas won’t be Christmas without any presents,’ grumbled Jo, lying on the rug.”

But. As a strong-willed 21-month-old’s mother who survived 25 December 2013 by the skin of my teeth and only thanks to the fortifying effect of cold white wine by the pool after my daughter had finally gone down for her nap, I’d like to set Jo March straight. I now know that, in fact, Christmas without any presents would be, well, like Christmas.

Before Lil A came along, Christmas Day was all about preventing sunburn and curing the Christmas-Eve-dinner hangover (usually with seabreezes, both the cocktail and the meteorological phenomenon, and beer shandies). This past Christmas, though, was all about the beautiful burst of energy that is Lil A – her presence at the table, and her presents under the tree.

For her first Christmas, when she was just 8 months old and crawling, I wrapped up little packages of fabric ribbons, which she, predictably, loved. But now that she is an actual functioning member of the family, and by far the cutest and best beloved member, she was the recipient of many, many presents.

I must say that I am overwhelmingly grateful for the love that all four of her grandparents shower on her. She is a very lucky kid. She is the first grandchild on both sides of the family, and has been given so many things during her little life that her dad and I have hardly had to shop for stuff for her at all (except for nappies – man, will I be thrilled when she’s fully potty-trained!), which, for two people who hate shops and are not terribly fond of spending money, is a massive bonus.

But the trouble with Christmas is this. All the presents. All at once. All the shiny, exciting things she’s never had before, and now suddenly has. All at once.

There was a doll that came with its own little pram – huge thumbs-up from A. But then there was another doll, this time with its own little baby bottle. Another thumbs-up from A, but mostly because of the bottle – she is going through a delayed regression of just wanting “bottlebottlebottlebottle” instead of her sippy cup, even though she has been off bottles for nine whole months. So the doll’s bottle got taken from her and hidden, which I think is where it all started going wrong. Cue first foot-stamping tantrum (or, to use her dad’s word, Haka) of the day.

There was then a Santa sack (basically an enormous version of a Christmas stocking) full of awesome things like a plastic wheelbarrow and books and gardening tools and rubber ducks and so many other toys that I can’t even remember what was in there. Then, before she could experiment by putting the doll in the wheelbarrow and the books in the pram, there came more presents – a zebra rocking-horse (which she called “car”) and a black plastic motorbike (which she called “car”), which was her only present from her dad and I. She’s too little to ride the bike by herself, and got cross about that, and then remembered the baby bottle and got cross about that, too. Then the doll kept falling out its pram because she couldn’t fit its legs through the leg-holes and that was understandably frustrating. And then I realised it was about an hour past her usual naptime, and then, instead of cuddling her teddy and saying “bye!” as she usually does when put down to sleep, she stood in her cot and screamed “PRAMPRAMPRAMPRAMPRAM! No, no! PRAMPRAM!” for approximately an hour and a half before, I assume, collapsing in an exhausted heap.

When there were no more noises from her room, I realised something: firstly, just how wrong Jo March was about what little women really need at Christmastime. And secondly, that if we’d just let her open one of her presents in her mound of gifts, and kept the rest to be handed out one by one over the course of a few days, we’d have had the rest of the morning to stroll down to the beach in a languid and relaxed fashion. Having her grandparents and both parents with her in the tidal lagoon would have made Lil A happier than any of those presents (okay, maybe not happier than the doll in the pram – that might be pushing it, so to speak).

Of course, the mouth ulcer I had wasn’t helping my mood at all (that’s what I get for swapping my diet of vegetables and grains for one of cheese and crackers), and nor was my post-Christmas-Eve-dinner hangover. But I know I’d have been able to cope with those more resiliently if I’d spent the last hour ankle-deep in the lagoon, in the shadow of Chapman’s Peak, watching Lil A holding her breath and dunking her face in the water, coming up with water streaming out her nose and shouting gleefully “FACE!”, instead of listening to her howl in misery and bewilderment and crossness.

So next Christmas, we’ll only be opening one or two presents with Lil A, and the rest we’ll save for a rainy day. If the weather’s anything like this year, she’ll only have to wait a couple of weeks. (“January’s just not January without any sunshine,” grumbled Michelle, frowning out the window at the mist and drizzle.)